Welsh Government’s anti-smacking campaign backfires as support for ban falls, according to own survey

The Welsh Government’s anti-smacking campaign is backfiring as support for its criminal ban on smacking is falling, according to a new official survey.

The Public attitudes to physical punishment of children: Wave 3 survey, 2020, published without fanfare at the end of last month, found the proportion who were in favour of the legislative change fell from 46 per cent in 2019 to just 38 per cent in 2020. 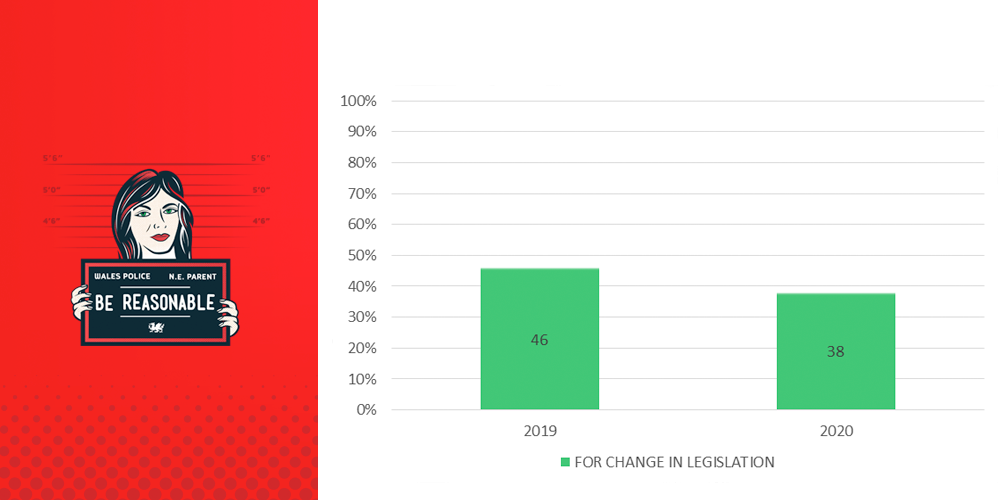 Simon Calvert, a spokesman for the Be Reasonable campaign, commented:

“These findings show no matter how hard the Welsh Government tries, most people will never back the ban.”

“Those surveyed appear to recognise what Be Reasonable has been saying all along – that criminalising loving parents for administering a gentle tap on the bottom will do more harm than good.”

Data from New Zealand, which has a similar legal system to Wales, showed complaints to police against parents doubled over the first five years of their ban on smacking. (Page 57) The Welsh Government has urged people to report parents who smack to police and social services, despite their previous claims that a ban would not criminalise parents. This explains why the £7,885,000 cost of implementing the ban over six years includes over a million pounds for extra policing, the Courts and Crown Prosecution Service.

The Government’s Wave 3 survey found that the public are now more confused about the status of legislation around smacking, with just 22 per cent of respondents knowing the current situation, compared to 28 per cent in Wave 2.

When prompted, the figure for those who said they knew about the ban rose to 44 per cent, but this was also down on the previous figure of 49 per cent.

The study carried out by the Welsh Government’s Social Research and Information Division also found a drop in the number of people who said they were in favour of a change, falling from 46 per cent to 38 per cent.

This lack of support for the smacking ban echoes previous surveys, which found strong opposition to changing the law. A report from the Office for National Statistics commissioned by the Welsh Parliament in 2019 found almost seven in ten (68 per cent) of the individuals who submitted evidence as part of the pre-legislative consultation process opposed the smacking ban.

A poll conducted in 2017 by the highly respected ComRes/Savanta polling company found:

• 76% of Welsh adults did not think parental smacking of children should be a criminal offence;
• 77% were concerned a smacking ban might flood police and social workers with trivial cases which mean they struggle to stop serious abusers;
• 77% thought it should be the role of parents and guardians to decide whether or not to smack their children.

The Welsh Government’s #TalkParenting exercise found nearly two thirds (64 per cent) thought smacking shouldn’t be banned, while only 30 per cent thought it should.

“When the Welsh Government introduced the ban they tried to claim it would have few drawbacks, would not cost a lot of money and was popular. Yet the then Children’s Minister admitted that more than 500 parents per year could be investigated, official documents have revealed the eye-watering costs of the ban, and despite months of Government spin the public still do not support changing the law.”

“We all want children to be safe and well cared for, but criminalising loving parents will have the opposite effect. As well as wrecking good families, investigating complaints of mums tapping their tots on the bum will be a dangerous distraction to overstretched police officers and social workers. Those who work in the NHS, in schools or in caring professions face suspension from their jobs. Even if found to be completely innocent, they could still have the complaint recorded on state databases impacting their future careers.”

Mr Calvert was referring to correspondence from the then Children’s Minister that implied thousands of parents could have their names recorded on the National Law Enforcement Database following reports of smacking, potentially ‘blacklisting’ them from working with young people and vulnerable adults. This could lead to shortfalls in personnel in some local authorities and consequent reductions in services. In a letter, Julie Morgan MS confirmed that information about parents who are suspected of smacking, or where the police decide not to take any action, will still have their details recorded on the police database. “…The National Law Enforcement Database (LEDS) will be set up to replace both the existing Police National Database (PND) and Police National Computer (PNC). Currently, conviction information is held on the PNC, and records on non-conviction information (e.g. intelligence, non-statutory out of court disposals such as community resolutions) are held on the PND.”

The letter goes on to encourage the reporting of “non-conviction information” which includes allegations that did not result in any arrest being made, as well as concerns passed on to the police from other public bodies (e.g. schools or social services).

“It’s not too late for Government ministers to admit the legislation will do more harm than good and stop it. Then perhaps we can all work together to put in place policies that will support loving families rather than penalising them.”

Notes to Editors:
Welsh Government FAQs confirm that there is no evidence that an occasional gentle smack does any harm to a child. Asking if physically punishing a child causes long-term harm, it says:

The Be Reasonable campaign is a grassroots coalition of parents, academics and politicians who oppose making reasonable chastisement a criminal offence.